About College
City College, Calcutta is one of the oldest first grade Colleges in Bengal. It was founded in the Year 1939 by a group of pioneers like Ananda Mohan Bose. It has a long record of brilliant results and can claim as its alumni 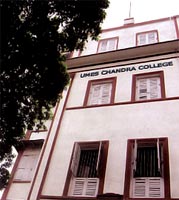 many great and noble sons of India. The Commerce Section of the College was inaugurated in the year 1939. It has since expanded into eight units, housed in three separate buildings.

Invited modestly as a Department of the Parent college on July 18, 1939 the Surya Sen Street (then Mirzapur Street) Evening Unit proved an immediate success. In 1941-42 Morning Classes were started at the same centre to be followed in 1945-49 by another Evening Unit located at the building of the parent institutions at 102/ 1, R. R. M. Sarani (Amherst Street). Owing to riots, arrangements for the Day Classes were made in 1946-47 at the Amherst street building. An emergency branch at South Calcutta was also started in the same year and this Branch gradually grew into a centre with separate Units such as, morning classes for women students, day classes for commerce and arts students (Male).

The unique feature of the Commerce Department of City College is that all the Units are self-contained. Forces of circumstance led to the expansion of the institution; but at every stage, the constant endeavor of the College Authorities has been to further the interest of education.
ADMISSION
(Apply, Merit List and Admission Informations)
Apply Now