About College
Morning Star Regional Seminary and Morning Star College are two Institutions owned and managed by the Bengal Catholic Priests’ Training Institute, registered on 10.1.1979 under the West Bengal Societies Act XXVI of 1961. 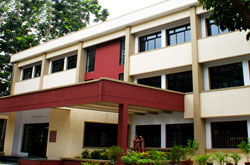 Morning Star Regional Seminary was established on June 4, 1968, as the Calcutta Archdiocesan Seminary. On August 6, 1971, the B.A. Department of the Seminary was affiliated to the University of Calcutta, with the name of “Morning Star College”. The first course of Theology began in 1972. In May 1974, Morning Star became a Regional Seminary to serve the dioceses of Bengal Region, namely, Asansol, Bagdogra, Baruipur, Calcutta, Darjeeling, Jalpaiguri, Krishnagar and Raiganj. The first batch of deacons from this seminary were ordained in December 1975.

The residential staff of the seminary is mainly drawn from the diocesan clergy of the Region and the Society of Jesus, Calcutta Province. Though the Seminary is primarily meant for the formation of priests for the West Bengal Region, it also caters to the seminarians of the neighbouring dioceses.
ADMISSION
(Apply, Merit List and Admission Informations)
Apply Now