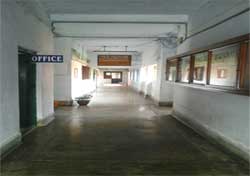 the name of Capt. James Buchhanan, the founder Principal. The campus in a rented building at 26-A Ballygaunge Circular Road, Calcutta-19 had very little scope and space for the type of activities and the students numbering only twenty had to move out to use the playground of Ballygaunge Government School. With the introduction of the Youth Welfare Scheme in 1938 which provided for the expansion of the training centre under the nomenclature of Government College of Physical Education, Bengal, the institute was shifted to a new rented building at 30, Ramakrishna Samadhi Road, Calcutta -11 and the sanctioned strength increased from twenty to forty. The institute moved to its present premises at Banipur with a new name as Post Graduate Training College for Physical Education with the intake of sixty students in 1956. Further the strength increased to one hundred and twenty in 1963. In 1982 the institute celebrated its Golden Jubilee and in 1992 its Diamond Jubilee.

Right from its inception the institute has striven for academic excellence with great success producing brilliant result as University toppers.

The institute also emphasises on the inculcation of the ethical values as well as overall enrichment of the personality of students. Warm and friendly relations between students and staff are one of the most distinguishing features of the institute.
ADMISSION
(Apply, Merit List and Admission Informations)
Apply Now

RANKINGS 2023
(based on NIRF ranking)