About College
Thakur Panchanan Mahila Mahavidyalaya is the only girls’ college in the district of Cooch Behar, West Bengal. It was established on the 18th day of September, 1981. It is affiliated to the University of North bengal. Initially the college 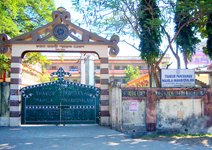 started with a few students at Sunity Academy, the Government School for girls. It was shifted to a semi-permanent structure near Rajbari Campus on 2nd July, 1982. The foundation stone of the present college building at the new site was laid by Sri Jyoti Basu, the then Hon’ble Chief Minister, Govt. of West Bengal on 2nd December, 1997. The inaugural ceremony of the newly constructed college building is being held on the auspicious 25th Baisakh, Rabindranath Tagore’s Birthday 9th May, 1999. Late Kamal Guha, the former social worker and former MIC, Agriculture, Govt. of West Bengal was one of those who extended their whole hearted co-operation to establish this institution.

The college obtained UGC’s recognition under section 2(f) & 12(B) in December 1993 and was accredited in 2004 by NAAC and was awarded C+ Ceretificate. The college is the first in the district to undergo the process of accreditation. Re-accreditation is due in 2010.