About College
The Calcutta Anglo Gujarati School (or CAG School) is a private high school of Kolkata, India. The school has two separate buildings, one for boys school and one for girls school. The school is located in Pollock Street in Burrabazar area, the 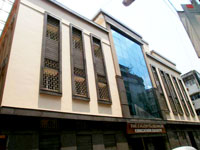 busy commercial hub of the city.

The school was founded in 1893 by the Gujarati speaking business community of Kolkata, with an aim to provide education to their children in their mother tongue, Gujarati language. The school is patronized by all the Gujarati speaking community, irrespective of their religion, Hindu, Jain, Kutchi and Gujarati Muslims communities like Bohras, Memons and others, contributed to its foundation and development over the years.

Gujarati remains the first language in the school where, till 1985-86, all subjects were taught in Gujarati. Now English is the medium of instruction. The school is affiliated to the WB Board and students had to appear for Madhyamik examinations for passing out.
ADMISSION
(Apply, Merit List and Admission Informations)
Apply Now