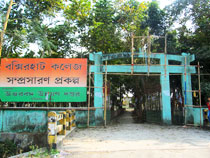 Bakshirhat Mahavidyalaya(BM), Cooch Behar established on 24th Oct, 2005 is a renowned Arts college affiliated under North Bengal University. It was the long cherished dream of the people of Bakshirhat Block, situated towards the north-east of West Bengal, in the Cooch Behar district near Assam border. In the month of June of the year 1999 an Organizing Committee was set up for fulfilling this goal. Applications were sent to the Higher Education Department, West Bengal and the University of North Bengal for permission to set up a college. Bakshirhat High School initially gifted six Bighas of land to the Organizing Committee and later on around three and one-fourth Bighas were bought from generous people for setting up the college. Later on people from various walks of life came with help of different kinds of set up the college. On 28th March 2001 an Inspection Team came from Higher Education Department to find out the possibilities to set up the college in Bakshirhat. Later, on 24th of October, 2005 the Government gave its final approval for the setting up of the college
ADMISSION
(Apply, Merit List and Admission Informations)
Apply Now